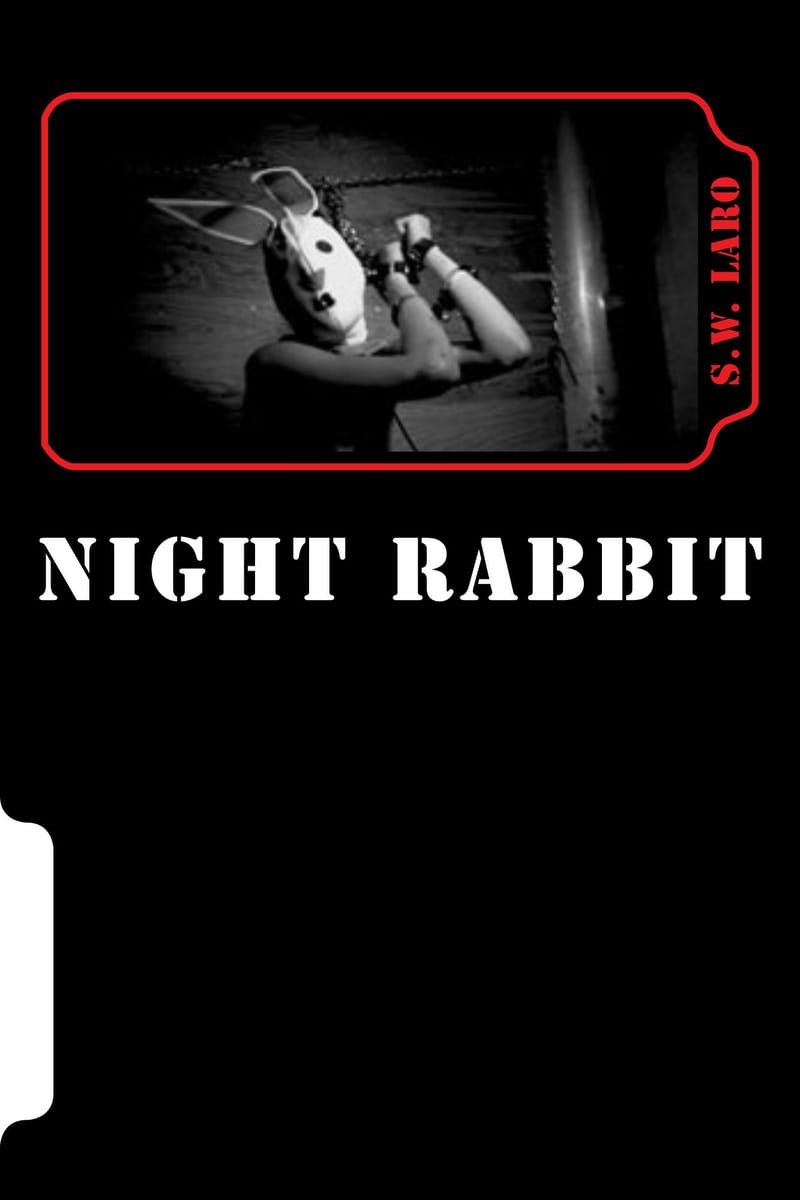 S.W. Laro speaks to his new play that focuses on the last phase of a relationship between a couple trapped in addiction.

I wrote 'Night Rabbit' as a catharsis. No other reason. I had been in love with someone for three years battling not only her intense alcoholism and drug addiction but also my own toxic narcissistic persona and anger. Our combination of personality disorders while trying to forge a loving union devolved into a connection of contempt, jealousy and rage. Ultimately, no one survives addiction as a couple because sobriety only happens when fought alone. My saying is - 'I will not bear witness.' After our three years together I chose not to watch her destruction as well as, my own, as a man incapable of true soft compassion which was what this woman needed. My tough intolerance out of deep love and concern, failed.

One thing about addiction - ALL flaws, sins, toxicities n' truths shall be revealed. Nobody can hide. For long. Reflections can't lie - lovers like it or not are mirrors to each other.

I hope the One Act bullet shot shows an audience a portrait of two beings fighting for their lives as love rots off the vine. Afterall, love dies fast when addiction reigns supreme - that fact more than the sickness of substance abuse itself as it reaches a summit, grinds the soul to dust. In a culture at present experiencing a plague of opiate and social media addiction, night rabbit as allegory to other addictions is the play's underscore.

Actress/Director Ms. Zillah Glory (who will also direct my play JOSHUA LIMBO in late 2019) is playing the role of 'Emma' as well as, co-directing with me as writer - (Look forward to her own commentary here on this site in coming months) I think it's important to say clearly that my play does not offer solutions to addiction. In full disclosure, 'Henry' in the play is in many ways myself - from 1994-2002 I was a semi-functioning addict - my dark road starting in Hollywood after I chose to leave the acting business (MORTAL THOUGHTS w/ Bruce Willis & Demi Moore when I played his brother Joey) and after a divorce from my wife who was an accomplished film/tv actress, any judgments in this piece are purely set on me. I know what addiction truly is and as it's said in the play; 'Addiction is NOT a disease. Dis-ease is the presence of some 'thing.' Addiction - is the ABSENCE of everything.'  Period.

A self-inflicted wound all the way down the dirty road.

I never went to a rehab or had sober ppl looking out for me in any way. I hid my abuse from family for the entire 8-9 yr run addicted to alcohol, cocaine, cigarettes, sex and self-hatred, the greatest of those sins. Any addict who doesn't admit to self-loathing fueling his/her obsession with switching on the brain's euphoria is lying. The lying indeed, the other shameful reality of an addict. It becomes commonplace akin to grains of sand on a beach - infinite. The play is a fast based confession, a vomiting of survival and deprivation only desperate lovers engage in when they feel love fading away into nothingness.

In my addicted days, I had nothing to save or love or commit to other than to ingest as much narcotic and gut rot as possible. I was absent but fully present in the abyss of sorrow and guilt. Regret, the victor always. A friend said once, 'regret's a tough nut to crack,' and he was right. Henry, like myself walks in it daily which colors how he reacts to Emma while facing his own reflection in the degradations she suffers. Addiction is only a wound never a disease nor should the medical community continue forcing society to believe this bullshit so to sell prescribed drugs to help cure an addict. There is no cure 'cept for epiphany - religious or spiritual solely dependent 'pon the individual's quest for relief.

Drugs won't give you access to epiphany, not man made medications anyway. I could go into alternative plant based 'earth' healing but this isn't the forum. Bottom line is we still have a treatment agenda which insists on giving the addicted more shit to swallow - the hand to mouth gesture, preparation before taking these SSRI's (serotonin inhibitors), the choreography to attain pills from a psycho-pharmacologist or psychiatrist-just another user to seller scenario that does nothing to help an addict prohibit anything. The medical industry uses what's called 'dual diagnosis' to rehook addicts on legal medications with tremendous side effects vs their illicit drug use that brought them to rehab to begin with.

It's the chicken or the egg cliche - mental illness causes addiction (self-medicating) or addiction created one's mental illness. So they got ya on both ends ya see? Take these pills for your mental illness and take these over here for addiction. How that isn't enabling addiction but in a medical environment vs the streets is beyond my imagination. But so it goes.

Night Rabbit does not propose a better way to get off drugs of choice nor does it pretend that Emma or Henry actually need to be saved or healed. Their connection as lovers is a snapshot in time of people unable to listen, move on or adopt self-change. There are countless texts and research papers about addiction on line and in books, as well as, endless pro and con addiction therapy/histories on YouTube. Would seem YouTube has become the self-help encyclopedia of our Time with no end in sight for the amount of information uploaded and to be uploaded in the future. And not all of it useful. I do admit as I must related to this topic and my play that in no way am I an anti-drug moralist for abstinence. Mankind has been seeking altered states of consciousness for millennia. Hominids have an innate NEED to seek truths, see visions with the aid of something ingested and to feel what it may be like to 'not' be human and unite with the gods/goddesses.

No civilized nation or tribal peoples will ever be created who do not possess that birthrate. Human beings need to turn on and OUT sometimes either for a random quest to feel good about life stress or simply to attain a connection to mother earth and the spirit realm via psychedelic trips n' fun rides of the mind. Addiction such as it exists in 2018 with a growing scourge of users hellbent on tuning out on opiates or what are commonly called happy pills, will not subside any time soon - which is why everyone is so worried. This opiate problem isn't 1968 at the height of the LSD hippy movement when due to the medical concerns in San Francisco after a long summer of youth descending 'pon the city at Haight/Ashbury, LSD became illegal; but once had been a legal substance for research purposes.

Opiates are different. They were prescribed for everyday mundane pain issues by legit doctors who may or may not have known the dangers. The last several years and likely going back to 2000, this drug crisis is enduring because this culture uses drugs not for spiritual motives for self-improvement and soul healing but purely for the frivolity. That IS the real danger more than any drug itself - casual indifference to feeling good at the expense of short and long term health risks. That is why any substance abuse of any kind must be relegated to the spirit journey vs everyday reliance. It's what I try to live by on my own path - 'peeking behind the veil for small glimpses of the Divine.'

To repeat, the play focuses on the end of a relationship as these lovers can only hang on to the potential of sobriety but NOT a sober life fulfilled by either of them. Their addictions are in full bloom when the play opens and when it comes to end. The hope of a cleaner future exists in the audience's mind not the characters. As writer, I feel the message of the play is a warning to lovers to take pause when a pause/stasis and emotional limbo is needed to save what may be saved; rather, Emma & Henry are unable to stop the runaway train of how they react to each other so the end of the line is in full sight. Drug addiction serves as a catalyst for the narrative but is not the theme.

How people kill love IS the theme beyond the degradation and self-loathing.

If I could return to one or two moments with my ex and take that more compassionate n' thoughtful pause, I'd be grateful. But the past is dead. And lovers must leave each other at the river then mourn n' move on. Such is the way the gods intend for us. I hope this work will achieve some of what I intended for it when I wrote it and as we rehearse and make edits before the piece is mounted, that between myself and both actors the audience will experience an even more compelling fiction.

Stay tuned for me on the play by me and Ms. Glory!